A grizzled man with bags under his eyes and too many wrinkles for his age. But within his eyes is intelligence and a fire...

Gill Corbin is a stocky man. Slightly shorter than average, his muscles are also not well defined. But he seems to have heavy bones and thick skin which contribute to most of his bulkiness. With dark hair slightly graying and deep brown eyes, the bags under his eyes give him a bleak look expressing both the exhaustion of age and the fatigue of a hard life. And yet he carries himself nimbly and with precision and in his swing and step is a fire of life that can’t be ignored. Alas, this fire extends to his tongue as well, drawing out snide remarks at the expense of others.

Not much is known about Gill except that he came in on Sandru’s caravan. In fact, it’s not even known why he joined in on the goblin hunt or why he carries only a shield. No sword, no mace, no magic. Merely a shield.

When asked about his skill set, he replies simply with, “Monsters like to headbutt my shield – not sure why. Apart from that, I know a few things about wounds and poisons and how to wish them away with a lullaby. If you don’t like me singing or monsters being stupid then I can leave…”, and says nothing more in the matter.

More recently, he was reunited with his long lost sister, Kessendra, and his past as a child of the noble house of Aulorian from Cheliax was revealed, as was his true name – Gilmonte Aulorian. Details about his past can be read in Kessendra’s biography. 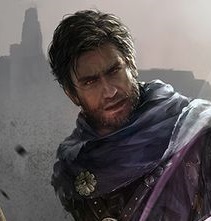