Ulf Gormundr was born the son of a Varki shaman and an Ulfen whaler. Although his father sometimes took him on voyages to Kalsgard or out in the Steaming Sea, Ulf was usually left in his mother’s village in the eastern Icemark. Ulf idolized the crusty Ulfen sailors who were his father’s shipmates and always intended to join the whaling trade when he came of age. When Ulf was just 13 years of age, however, his father failed to return from a voyage, and word eventually reached the village that his ship had gone down in a storm at sea.

Ulf traveled to Kalsgard and attempted to join the crew of another Ulfen whaler, but his age, inexperience, and halfVarki blood led all of the captains to turn him away. He stayed in Kalsgard for a time looking for a trade with little success until he encountered Inuk, a Varki tracker from another Icemark village. Inuk made a good living working as a hunting guide in the Grungir Forest and Stormspear Mountains, and took the young Ulf under his wing as an apprentice hunting guide, alongside his own daughter, Uksahkka. Ulf and Uksahkka became fast friends, as close as brother and sister. The two often joined Inuk on his excursions and sometimes made their own way across the tundra to visit their home villages in the Icemark.

When Uksahkka and Ulf were in their late teens, Inuk took a commission with an Ulfen jarl to guide some of his retainers on the Path of Aganhei over the Crown of the World and into the exotic lands of Tian Xia. Although Inuk had made this trek with his own father once as a boy, he had never attempted it on his own. Despite the pleas of Uksahkka and Ulf to not go on the dangerous trek or to at least take them with him, Inuk could not resist the lucrative pay offered, and forbidding the youths to follow, set out with his charges into the Stormspear Hills. Neither Inuk nor his party ever returned.

When it became obvious that the expedition was not going to return, the enraged jarl had Uksahkka arrested and pilloried, claiming that the Varki guide had led his caravan into an ambush and looted their murdered bodies before disappearing. Ulf’s Ulfen blood prevented the jarl from making the same baseless claim against him, but not from blackmailing him: If Ulf did not follow the Path of Aganhei himself and discover the fate of the party, bringing back proof of its discovery and the blood of its traitorous guide, Uksahkka would not be released from the stocks. With no other way to save his adopted sister, Ulf set out alone, never having trodden the Crown of the World before. Two months later, Ulf did the impossible—he returned alive.

Through a combination of luck, guile, and his own tracking experience, Ulf had actually discovered the remains of the Ulfen party. They had been caught unprepared by a massive snowstorm, and blaming Inuk for their misfortune, had murdered him. Left to their own devices far out in the frozen wasteland of the Crown, the fools had succumbed to the elements and slowly froze or starved to death. Ulf carried with him proof of Inuk’s murder and the corruption and incompetence of the jarl’s own men.

Upon his return, Ulf found Uksahkka very near death, having barely survived on the scraps of food and water that she could beg from passersby. Ulf then publicly confronted the jarl with his proof and demanded Uksahkka’s release, but the jarl contemptuously ordered one of his huscarls to kill the young half-Varki guide. But Ulf had learned something of fighting too, not only from his father’s roughand tumble whaler crew, but also from the Varki hunters of his youth, and a throwing axe found the huscarl’s neck before he was even able to close for combat. Another found the jarl’s back as he fled. Taking the jarl’s sword as his own, Ulf broke the stocks that held Uksahkka and took her back to the Icemark to nurse her back to health. Many witnesses had seen the injustice perpetrated by the jarl, and he was no favorite of the king’s, so no weregild was demanded and no blood feud sanctioned. But word did get out that Ulf Gormundr had singlehandedly trekked the Crown of the World and returned alive to tell of it.

For years now, Ulf and Uksahkka have served as guides throughout the Lands of the Linnorm Kings, and Ulf has established a reputation for himself as a skilled guide along the Path of Aganhei. 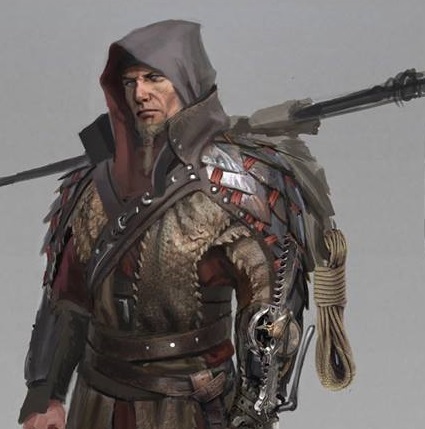